Around this time last year, the three credit reporting agencies had to change their rules (due to an agreement with several state’s attorney generals in 2015) surrounding reporting of a consumer’s medical debt in collections. Now, they basically have to give consumers a standard 180 day “grace period” before reporting medical collections on the consumer credit report. Another reporting change requires the bureaus to remove a past due medical bill that is later paid by insurance.

For many Americans, the increase in medical debt is due to higher deductibles and out of pocket costs for healthcare, timely payment by insurance to providers, and the decision by insurers that a provider was “out of network” resulting in a lower reimbursement and the outstanding costs passed on to the consumer. A fun little statistic related to the rules change is that up to 80% of bills submitted by providers to insurers are incorrect the first time. So insurance doesn’t pay them, the bills must be corrected and resubmitted for payment. This results in delays in settling medical bills. Sometimes for months.

The 180-day reporting delay is good for consumers with medical debt because these bills are often passed to collections quickly, within 30-60 days after the payment was due. Faster than many creditors will pass off non-medical debt accounts. This allows time for consumers to deal with insurance, pay their medical bills, and work on billing disputes even if the account is with collectors.

It is important to note that, while it is true that it will no longer have as big an impact on the “FICO” and VantageScore credit scoring models for 180 days, other credit scoring models that lenders use have not adopted this approach. So, you still need to watch your credit report if you are facing medical debts in collections.

Here are a few other things to consider if you or someone you know is facing medical debt:

• You are not alone. Around 43 million Americans had medical debt on their credit reports last year. The average amount of medical debt in collections was $579.00 last year. With 78% of Americans living paycheck to paycheck, this is a large enough number to cause financial hardship.

• While medical debt should NOT be ignored, if you are struggling with debt, it should be given a lower priority than other consumer debt, such as credit cards and personal loans. To do this, the medical debt must remain a “medical-debt,” meaning do not borrow or pay these debts with a credit card.

• Collectors will often try to push you to pay the bill, even suggesting you just put the balance on a card. But if you pay the medical debt with a credit card, you can limit your ability to settle the debt, or seek financial assistance from the hospital or other agency. You can stop collectors from calling by making your request in writing. You just need to send a letter.

• There are statutes that protect consumers who owe medical debt from being turned away from the emergency room for medical care. And, according to the National Consumer Law Center:

• Medical debt is a big reason for bankruptcy, but not why you think. When people are too ill to work, income plummets, savings can be exhausted and often medical debt was transferred to credit cards.

Remember, you now have 180 days to get medical bills handled before they hit your Equifax, Experian, or TransUnion credit report. You can dispute anything erroneously reported and have the records of medical bills that were paid by insurance removed. 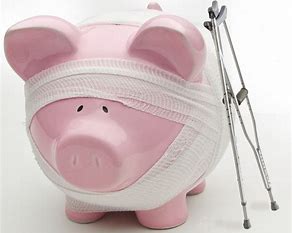