This is the week that the IRS is estimated to process to filers. In the first quarter of every calendar year federal (and sometimes state) tax refunds are issued to qualified filers. In fact the average tax refund for the 2018 filing year (2017 return) was over $2,200.00. I’ve already spoken about how to ensure every dollar you can keep goes into your pocket each month, and not into the IRS coffers (until you file the next year’s return). Another issue, comes from the fact that the money received by many taxpayers is immediately spent paying down debt accrued the previous year. Some of that debt is from short-term overspending during the holidays, accounting for about 39% of Americans using the refund to clear that debt.

It is this cycle of annual debt that needs to be addressed, because if $1,000.00 of that refund was placed into a “baby” emergency fund, many Americans would not have to incur debt for “emergencies.” The stats are incredibly scary. The latest figure is that 78% of Americans live paycheck to paycheck. Almost 8 in 10. Following the logic, everyone knows at least a few people who are unable to cover even the smallest of budget hits without putting another bill in jeopardy. Additionally, a full 70% of Americans are in debt.

The recent government shutdown highlighted that for many Americans just treading water with money, they are one missed payday from being in financial distress. And we all saw the comments and memes about how government workers should have something put away or should be able to cover one month of expenses. Based on the statistics, 8 out of 10 cannot.

So, why am I telling you this? If you have a tax refund coming, and do not have $1000.00 saved for an emergency, you are not taking full benefit of the Uncle Sam Savings Plan. $1,000.00 goes a long way for car or home repairs, unexpected expenses, and other hits to the budget that throw a wrench in how the bills are paid. And once you put $1,000.00 away, be diligent in keeping it that way. Refill it if it gets used. Seriously. Mike and I had a pipe burst recently during the Polar Vortex, and we mopped up the water, grumbled a little, and called the plumber, knowing it could be covered from the emergency fund. (For Ramsey listeners, we are finishing baby step 2.)

Of course, $1,000.00 isn’t a “full” emergency fund, which is three to six months of expenses saved, but it is a good start to cover many, many of the instances where Murphy moved into the spare bedroom for a week. Of course, my next piece advice is to get out of debt as fast as you can, so YOU control your income, not some credit card company or bank. When you commit to payments, you promise to give them a share of your income each month, no matter what life throws at you. And I would strongly urge anyone getting the “average” refund to apply the $1200.00 over that emergency fund starter towards any outstanding debt.

Somewhere around 80% of taxpayers get some sort of tax refund each year, and that was true again for 2017. The average refund amount was $2878.00. And while many people love to celebrate the lump sum when they get the check, the IRS shouldn’t be used as a savings account. Here are a few reasons why:

1. You could actually have the money to use throughout the year. If an employee paid every two weeks adjusted their withholding to be accurate as to what they really will owe, that average “refund” of $2787.00 becomes $110.00 in the paycheck every payday. This equates to roughly $220.00/ month into the household! With 78% of Americans living paycheck to paycheck, that is a big addition to the monthly budget.

2. The IRS controls the overpayment until they give it back. The IRS doesn’t pay interest on the extra amount you paid or allow you to access your own money until tax time. Once you have it withheld, or you send it in for the self-employed, it is in the IRS coffers until you file your tax return. And the government isn’t paying you any interest on the money they get to use until they have to refund the excess you gave them. In reality, you are losing control of your own income.

3. The cycle of debt/ pay with return is expensive. Many Americans go into debt throughout the year and pay off balances with a tax refund. This allows lenders to charge interest, even short term, and the debt is much more expensive than if the money was in your budget every month to use. An extra $220.00 a month can prevent the need to take on short term and expensive debt, especially if you use that money for an emergency fund.

It’s too late to affect your 2018 tax return and refund, because the 2018 tax year closed about a week ago on December 31st. But you can make changes now to bring home more money in each check, and to prevent a huge sum being refunded in 2019. Check your withholding, by checking your paystub, or ask HR. If you had a change in dependents such as a new baby, kid graduated and moved out, or got divorced, make sure the number of people you are paying taxes for is accurate.

After your adjustments, enjoy the new sum in your paycheck, and for the first few months, why not squirrel the extra away in an account? You haven’t seen it regularly anyway. Only once a year in that government tax refund. 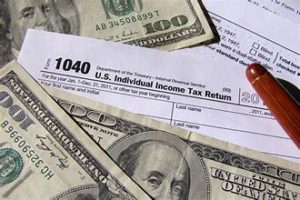